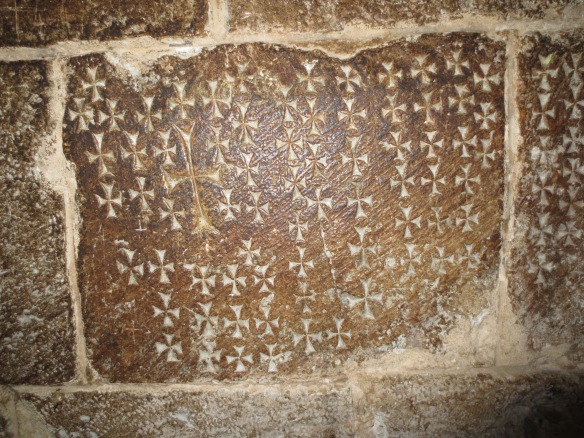 Crusader “signatures” in the Church of the Holy Sepulchre

It is 5:45 in the morning and Haifa is still darkly asleep.  This is a time I rarely see–only during the Fast, really.  But today, we are on our way to Jerusalem, a caravan of three travelers.

We take a bus and then another bus, and have a layover at the central station in Jerusalem, which is full of young soldiers, fresh-faced in their fatigues.

“DONUTS!”  I haven’t seen donuts in six months and I’m pretty excited that this huge bus station sells them.  (Now I know where to go when craving hits, and it’s a mere three hours of buses away!)  Jasmine and I share a big one with sprinkles that stain my lips while Sergey drinks some coffee sludge.  Finally we make our way to a tram that takes us near to one of the gates of the Old City.

I have a plan of attack.  First the Church, then the Wall, then the Dome, then the Mount.  En route to the Church of the Holy Sepulchre, we pass by several Stations of the Cross, and pause to touch the spot believed to bear the handprint of Christ.

“I touched this before,” I comment, showing off my worldliness.  “Yes, I’ve touched everything in Jerusalem.”

“No wonder you’re sick,” Sergey replies.  Indeed, I wasn’t the classiest travel companion, what with my wad of tissues and plugged ears.

When we get to the Church, we go through the various sites—the anointing stone, Calvary, the Armenian chapel with the Crusader imprints on the walls, that subterranean chamber… I try to recount the fragments of history I remember.  Something about Saint Helen and Constantine.

Next stop: the Western Wall.  The female side proves less interesting than the male section, where a number of simultaneous bar mitzvahs are happening.  Lots of Torah scrolls, boys in yarmulkes, and tossed candy give the place a jubilant spirit.  We climb onto unwieldy plastic chairs that seem placed there for the express purpose of letting female visitors ogle the masculine goings-on.  I’m pretty sure I ended up in at least one lad’s bar mitzvah video.

But the stop I’ve been eagerly awaiting is not the Church or the Wall—it is the Dome.  If I learned anything from the documentary that eased Jasmine into dreamland, it is that the Temple Mount is super important historically.  I hadn’t gotten to see the Dome of the Rock on my last visit because its hours are so limited, but this time, I was ready.

After a long wait in line, we walk up a sheltered bridge to the mount, where we find ourselves in a large open space with a long mosque to our right, the al-Aqsda.  Like moths to a flame, we are drawn up some wide stairs to the Dome itself, resplendent with delicately painted greenish blue walls and its shining gold dome.  Inside (off-limits to non-Muslims) is the rock from which it is believed Muhammad ascended to Heaven during His mystical night journey; apparently His footprint remains.

We wander around the huge plaza, which dates to the time of King David.  The area is surprisingly casual—some young women in hijabs study in a circle on the ground, while boys kick around a soccer ball.  Four young boys, munching on their lunch in an alcove of the wall, beg Jasmine to photograph them, then come to assess the result.  “Facebook!” they demand happily.

After lunch, we headed to the Mount of Olives to visit Gethsemane and the Church of All Nations…or the Agony, I’m not sure what its proper name is.  It is quite a different experience from last time, when it was thronged and someone came over the loudspeaker repeatedly to instruct “Silence”; this time, I feel at peace sitting in a pew, looking at the nighttime garden scenes on the huge mosaics around the walls.

It is sunset by the time we entered the Valley of the Dead, which is between the Mount of Olives and the Old City.  A funeral unfolds with Jewish men swaying in black robes; the muezzin pipes a call to prayer.

Eventually, exhausted, we got on the bus back home and realized with sighs of relief that the most comfortable seats had been reserved for us: the floor.  Yes, apparently it’s a-ok in Israel to allow people to stand for two hours on the highway.  After about 15 minutes of swaying over an IDF soldier and watching another passenger giggle at cat videos, I succumb to gravity and wedge myself and my backpack down into the narrow aisle, with my cohort following suit.  Soon, at my offer, two sleepy heads loll against me.  In a weird way, it was cozy, the three of us snugly squeezed onto the floor with views of people’s shoes, the lights through the windshield, and the diminishing kilometers to Haifa.