This blog is transforming into one of a recreational naturalist.  I promise, I do more than stumble across mongooses and petrified hedgehogs here!  It must be good karma from those tiny lizards I saved from sticky traps last year.So.  I was on my way out of the office headed to lunch.  Now, I have an uncommonly beautiful walk to the lunchroom nearly every day, walking through the blooming splendor of the gardens. There’s always some gem to discover, whether it is a tree snowing petals in February, the yellow snapdragons lit up by the sun, or a colorful songbird.But this day my encounter with nature was super duper extra special.There I was, on my way out, when I noticed something green sitting on the white marble steps. It was a chameleon!

Already preparing to tip over.

Imagine my delight at seeing this odd creature unleashed from the confines of a pet shop terrarium.  Its eyes oscillated in different directions. Its feet were cloven into two sets of two toes each. Its tail was curly. It was a true wild chameleon.I was getting pretty close to the chameleon because, technophobe that I am, I don’t know how to use zoom on my phone camera. The lizard seemed slightly nonplussed, then sort of tipped over and plopped off the edge of the stoop onto the next step, where it landed gracelessly on its side. I felt guilty, assuming I had caused its flop, but then it slowly picked itself up and walked to the edge of the step and proceeded to do the same, this time tilting over onto the gravel. 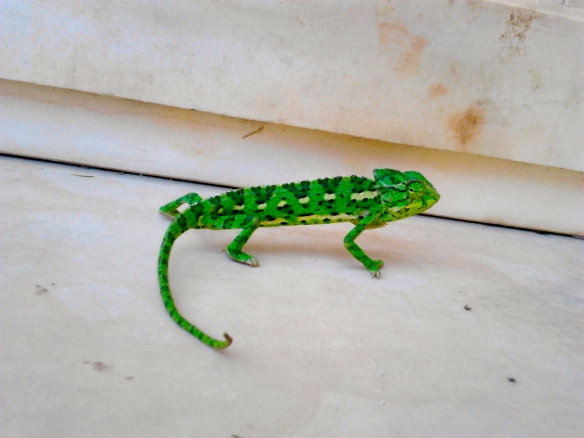 Gathering momentum for the next dive

It was truly the most unapologetically graceless animal I’ve had the privilege to watch. I don’t know how it even got up the steps in the first place, but I’m not sure that it had any options for descent besides letting gravity do the work.  Furthermore, it was clearly a slave to vanity, choosing to pose against the backdrop of blinding whiteness rather than the inconspicuous safety of camouflage against any of the abundant surrounding greenery.  If this was an Aesop’s fable, it would probably have been scarfed up by a fox.

Instead, clever creature, it decided its willowy figure was best accented with a vertical pose.

And then I had to go to lunch and resist the urge to make him my pet.

1 thought on “The Vainest Chameleon”